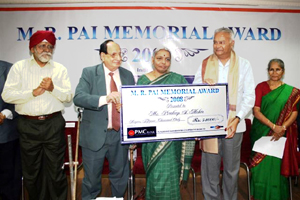 The Deputy Governor of the Reserve Bank of India (RBI), Ms Shyamala Gopinath presented the M. R. Pai Memorial Award to “the crusader of the consumers’ cause”, Pradeep S Mehta, Secretary General, Consumer Unity & Trust Society (CUTS) International, Jaipur, at a function in Mumbai recently. The function is being organised by All-India Bank Depositors’ Association, Mumbai.

Speaking on the occasion, Ms. Shyamala Gopinath, the Chief Guest, lauded the life-long efforts of Mehta. The citation read: “The splendid work done by you and your organisation in educating the public on competition and regulation over the years is exemplary. You are one of the foremost crusaders for consumers and we take this opportunity to wish you strength in your endeavours.”

The citation read how he had voluntarily given up his family business more than two decades ago to devote full time attention to bringing discipline, methods and systems to the consumer movement in India . He used his corporate acumen and non-conventional wisdom to create a global level modern organisation, which has incessantly been working for an enabling environment for the benefit of consumers — both at the grassroots as well as policy level.

The institute, CUTS international, imparts consumer education and acts as a guide-cum-mentor to many voluntary consumer organisations and individuals. “Mehta is a pioneer in institutionalising relevant studies and research on consumer topics, in creating mass awareness about consumer rights and responsibilities and protecting consumer interests. He works through an effective combination of advocacy and consistent lobbying for correction in the systems at the policy level, resulting in the introduction of new legislation and in effective monitoring of regulations”.

The organisers felicitated Mehta, “who shares the same beliefs with those of the late M. R. Pai, champion of public causes, in initiating a movement for consumer cause, especially creating a countervailing force of consumers to ensure justice and safety of consumers”.

After the presentation of the Award, Mehta spoke in response to the honour conferred on him and thanked the organisers. The award carries a citation and a cheque of Rs.51,000.

This news item also also be viewed at: http://www.thesynergyonline.com/breakingnews.htm