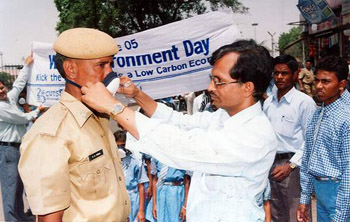 Consumer Unity & Trust Society (CUTS), appointed as the Regional Resource Agency (RRA) by the Ministry of Environment & Forests (MoEF), organised an awareness rally of students on June 05, 2008, on the occasion of ‘World Environment Day’. Students from Chandra Public School, Srinivas Nagar, Vishwakarma, Sikar Road participated in the rally. The rally started at 11.00 AM from Ram Mandir, Bani Park, Jaipur and reached Railway Station Circle. Students enthusiastically participated in the rally and raised slogans to spread the message of environmental protection and generate awareness among the people.

As the rally came to an end at the Railway station Circle, students urged the traffic police to put on ‘Pollution Masks’ and spread the message of safety against the presence of poisonous gases in the atmosphere. 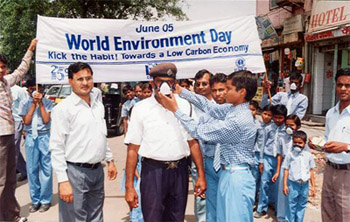 The United Nations Environment Programme (UNEP) has suggested the theme ‘Kick the Habit! Towards a Low Carbon Economy’ for this year’s World Environment Day. The carbon-di-oxide and other poisonous gases responsible for global warming, unpredictable climate and changes in the nature are increasing due to enhanced traffic resources, pollution and misuse of energy sources.