Developing countries often lack the resources and capacity to deal with anticompetitive practices in their countries. They need technical assistance from WTO, UNCTAD and CSOs like CUTS International to build the required capacity. One way forward is to create an International Competition Fund out of cartel fines imposed by rich countries which have a global dimension. This emerged in the discussion at an event on issues related to trade and competition in primary commodity markets organized by CUTS International at UNCTAD XIII. 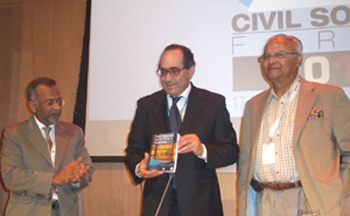 A joint publication by CUTS International and Centre for Economic Policy Research (CEPR) titled “Trade, competition and pricing of commodities” was also launched on the occasion by Hassan Qaqaya, Head, Competition and Consumer Policies Branch, UNCTAD.

In his introductory remarks, CUTS Secretary General, Pradeep S Mehta made a comprehensive presentation on cartelisation in global markets for primary commodities. He talked about the nature of problems, their reasons, governance challenges, and way forward.

Many developing countries are heavily dependent on primary commodities but receive only a small part of the total value chain. On the other hand, a small number of international traders and retailers control the large segments of the value chain in coffee, fertilisers, potash etc. The situation is exacerbated as many countries including the USA do not prohibit export cartels.

“Countries adopt a beggar-thy-neighbour policy and thus allow export cartels to operate freely”, said Mehta. “This is one area where capacity building is required urgently for developing countries to be able to deal with such cartels through extra territorial jurisdiction. They also need resources and effective cooperation from the rich countries, because just the law will not help them to deal with them”.

Mr. Qaqaya stated that cartels are both exclusionary and exploitative. Their actions wipe out the benefits of trade liberalisation through collusive behavior. Ironically, it was the US which allowed export cartels through their Webb Pomerene Act, whose goal was to promote trade at any cost. However, several European countries and Korea have now prohibited export cartels in realisation of their adverse impact on their own domestic economies.

According to him, countries need laws to deal with export cartels. There is also need to improve cross-border cooperation and intelligence-sharing among national competition agencies. In this regard, lessons can be drawn from the experience of consumer protection regimes in the world where cross border cooperation is quite advanced and effective.

Participants discussed the need for further case studies to better understand the economic consequences of export cartels at the national and international levels. It was also recognized that individual countries have less incentive to prohibit export cartels within their respective jurisdictions for fear of losing out to other countries which do not do so. This clearly indicates the need for coordinated international action.

Some ideas for the way forward presented and discussed in the meeting include: an agreement on information sharing on cartels; capacity building and technical assistance to developing countries; diversification of exports away from primary commodities; and establishment of an International Competition Fund.