George Cheriyan, director of CI member Consumer Unity and Trust Society (CUTS), has received the Rhoda Karpatkin Consumer International Award for 2013 for his contributions to the welfare of consumers. 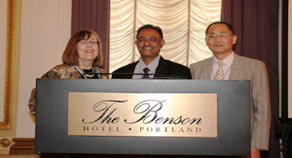 The award is given by The American Council on Consumer Interests (ACCI), a membership organisation for academicians and other professionals involved in consumer and family economics.

It honours the pioneering work of Rhoda Karpatkin who served as CI President from 1984 to 1991. Under her leadership, CI developed and cemented its commitment to building consumer organisations in developing countries.

During the ACCI annual conference, Cheriyan delivered the Rhoda Karpatkin international lecture, speaking on the topic of: ‘Consumer Protection Regimes around the World with Special Reference to the State of the Indian Consumer’.

In his address, Cheriyan said, “The mere existence of a law does not guarantee protection to consumers, there has to be commitment on the part of the Governments. The United Nations Guidelines on Consumer Protection (UNGCP) need to be further strengthened to guide individual governments for protection of consumers.”

CUTS is an international consumer organisation established in 1983 and presently working in more than 30 countries.

Cheriyan is a member of the Central Consumer Protection Council under the Ministry of Consumer Affairs in India and a member of CI’s expert group on financial services.

This news item can also be viewed at:
http://www.consumersinternational.org/