Ajay Saldanah is agitated. Seated in the last row of the 20 x 20 room in the community centre that is the Janakpuri Consumer Court, he waits impatiently with his lawyer for his case to come up. A languorous air hangs over the dilapidated court-room, which, at most times, has more lawyers than aggrieved consumers. Tired of waiting, they have stepped out. Saldanah too is tired of waiting, for his turn, for a verdict.

“This is going nowhere,” says the exporter from Delhi. “I have come here 10 times in four years.” He’s here because a car he purchased in 2006 allegedly had handling issues from day one and the manufacturer refused to replace it. He thought a consumer court would help, but it’s been a “harrowing experience”.

“I have been paying a monthly loan instalment of 18,000 for three years without using the car lest the company argue it’s an ageing problem.” Last year, an expert supported Saldanah’s claim in court, but still no verdict. “What else is the court looking for?” he asks bitterly. It’s a question that strikes resonance with many who seek redress in the 630 consumer courts in India, but end up trapped in the cycle of dates and hearings.

It’s ironical. Consumer courts were conceived, 25 years ago, in 1986, as a dedicated and speedier alternative to civil courts , but they have come to resemble the latter. “The same ills have crept into the system,” says Suresh Misra, professor & chairman, Centre for Consumer Studies , Indian Institute of Public Administration (IIPA). The government numbers suggest consumer courts have done what they set out to do. It says that 91% of cases in the district courts have been settled, 80% in the state courts and 87% in the national court.

What these numbers hide, and therein lies the story of the decay of consumer courts, is the time taken to settle those cases. The Consumer Protection Act, 1986, the blueprint for consumer rights in India, mandates all cases be settled in 90-150 days.

According to the National Consumer Disputes Redressal Commission, the Supreme Court in the consumer space, only 46% of cases in the district courts were settled in the mandated time and 38% in the state courts.

And, according to the ministry of consumer affairs, food & public distribution, there are 350,000 cases pending, led by Uttar Pradesh and Maharashtra (See graphic: Time Taken to Settle a Case) .

The states say the Centre doesn’t give them enough funds to run the courts. The Centre points out that consumer affairs is a state subject; and that though it gives them grants, the states neither use it well nor do they supplement it with their own support.

As the Centre and states trade charges, consumers like Saldanah wait. “We don’t advise consumers to approach these courts, especially if the compensation value is likely to be small,” says Ashim Sanyal, COO of Voice, a Delhi-based voluntary organisation that works on consumer rights. 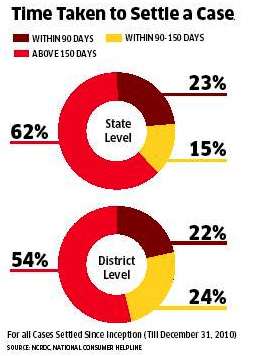 Consumer courts have a three-tier structure, like general courts. At the lowest level, there are district courts, one for a district. Called ‘district consumer forums’, they hear cases where the compensation sought is less than 20 lakh.

At the middle level, there are state courts (equivalent to the High Court in civil courts). They are called ‘state consumer disputes redressal commission’ (SCDRC), and each state and union territory has one.

Each district and state court has two members, while the NCDRC has at least four. Sanyal of Voice says most judges in consumer courts approach cases with a legal mindset. “They don’t show a serious understanding of consumer issues or a consumer’s state of mind,” he says. Lawyers, especially from the company’s side, add to the legalese.

Says Sanyal: “They prolong the case by taking adjournments on flimsy grounds. They complicate issues, which an ordinary consumer is not competent to match.” 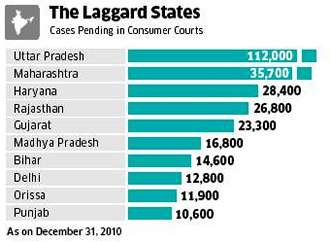 And if the judge or members are on leave, a verdict can’t be given. A district member in Delhi, on the condition of anonymity, says the 90-150 days deadline is unrealistic. “Each case involves several stages and each takes some time,” says the member. “It would normally need at least two years. Actually, there’s no point in having a time-frame because each case is different.”

The bald truth is that consumer courts don’t have enough benches to hear cases. For example, UP, which had about 28,500 cases pending on February 28, operates with two benches.

“It will need 10 more benches to clear this backlog over three years,” says Justice Bhanwar Singh, president, SCDRC, Uttar Pradesh. Forget adding more benches, even the existing ones are not occupied right now.

As on February 28, there were 315 vacancies for judges and members in consumer courts. Assuming each of the 630 courts needs a judge and two members means a total judicial staff of 1,900. In other words, 16% of positions are lying vacant, which adds to the backlog.

Justice Ashok Bhan, president of the NCDRC, says appointments are “low priority” for states. Bhan says the NCDRC advises states to start the process six months before an incumbent member retires, but this is rarely followed.

“It is never on time,” he says. “And, in many cases, the members are political appointees who have no clue.” Then, members are poorly paid, despite the recommendations of the PD Shenoy Committee in 2008.

At the Delhi district court, for example, a member is paid 9,000 per month and 5,000 as conveyance. Maharashtra pays 8,000, Orissa 6,500. The pittance for a salary dis-incentivises people from becoming a member and breeds corruption.

“It becomes easier for companies involved in disputes to bribe members,” says a senior official of the Department of Consumer Affairs (DoCA), the ministry arm for consumer issues. Judges are better paid. Retired judges, for example, receive their last salary drawn minus pension. The courts themselves struggle to meet running expenses. “In many cases, the court asks a complainant to pay to send a notice,” says Misra of IIPA. “It’s absurd.”

Adding judicial and administrative staff, and improve infrastructure, calls for funding. And that is a bone of contention between the Centre and the states. Says Singh of the UP state commission: “There’s a need for a clearly defined formula to decide the funds needed by a state commission, and how it is to be split between the Centre and the state.”

He suggests an equal contribution. At present, the Centre gives periodic grants to states, usually, as a per court amount. At times, it runs special schemes, and disburses an additional amount. In other words, the Centre’s contribution is unpredictable.

So, the state contribution essentially determines the funding levels. Mostly, it is inadequate, leading to dues piling up. One line of thinking in the ministry is that the Centre can use its Consumer Welfare Fund , which has 130 crore, to help in paying salaries.

“It (the fund) is mostly under-utilised,” says a ministry official, not wanting to be named. “And each year, the Budget makes new provisions.”

“Lack of will in administration at the Centre and the states has ensured a graveyard for consumer redress. The Centre can’t wash its hands off,” says the principal coordinator of the National Consumer Helpline.

The Centre-state conflict is an enduring one, and it tends to loom over even quasi-celebratory occasions. As it did on March 15 in New Delhi, when state and Centre officials dealing with consumer affairs met on World Consumer Day for their annual conference.

Officials from the Centre pointed out that only five of the 32 states and union territories had filed an action-taken report on the raft of resolutions passed at last year’s conference. The resolutions related to salaries, settlement of cases, monitoring, funding and training, among other things.

The conference ended on the note that such an exercise was a waste of time. Such brinkmanship has weakened consumer courts. The district consumer court has the same powers as a civil court.

“But once it goes legal, it has to be dealt with legally, though such instances are rare,” he says. Many companies have a legal team, which can stretch a case, as Asha Garg will testify.

Since 2007, this homemaker from Delhi has been making four trips a year to a district court trying to recover 50,000 from an investment firm. “As in family courts, advocates should be discouraged from entering consumer forums, except in special circumstances,” says Cheriyan of CUTS.

There are various initiatives underway to strengthen consumer rights and make companies more accountable, but none have statutory powers. There’s the National Consumer Helpline (NCH), which records consumer complaints and forwards them to companies. There are the consumer councils that work to protect consumer rights and create awareness. Delhi has started mediation centres.

“Their decisions are taken on-record by consumer courts,” says Rajeev Agarwal, secretary, DoCA. The upcoming consumer policy plans to encourage industry to make consumer redress part of its corporate social responsibility agenda. “We would expect industry and large companies in each sector to appoint some kind of ombudsman,” says Agarwal. But in the absence of legal powers, all these initiatives have limited utility. The consumer courts remain the only legal option. And they are in shambles.

Sometimes, when it comes to catching the attention of companies, 140 characters can say more than a case-sheet of many pages. About two years ago, one @Kiruba tweeted: “Cleartrip .com took my money and did not book my ticket to Malaysia. Had a harrowing experience at airport…”

Within days, 40 Twitter users either re-tweeted the post or drove their own nail into the travel portal. Cleartrip apologised to Kiruba on Twitter and promised to look into the issue immediately. Social media is a great leveller against big and powerful companies that err in their ways.

Companies don’t fear a consumer’s voice in a court, where it has legal eagles on its side and there isn’t an audience looking on. But on the World Wide Web, there are people reading, and reacting. It’s the place where companies have something to lose and consumers have a voice. And given the sorry report-card of consumer cases, hitting the social media before braving the courts is worth a shot.

This news item can also be viewed at: http://economictimes.indiatimes.com/