The SAARC Chamber of Commerce and Industry (SCCI) organised a session at the Annual WTO Public Forum on September 26, 2006 in Geneva. The Annual WTO Public Forum 2006 was held from September 25-27, 2006 at the WTO headquarters in Geneva. The objective of the Forum was to stimulate discussions among stakeholders and participants about significant WTO issues. The theme for this year’s Forum, “What WTO for the XXIst Century?” will focus on WTO and its significance in the 21st century.

The SCCI session entitled “Stocktaking on WTO Negotiations: Concerns of Developing Countries” highlighted and raised issues of developing countries, particularly South Asia, at an international forum.
The WTO has proved to be a powerful means for countries to promote economic growth and development. Trade liberalisation under multilateral negotiations is essential because it provides an opportunity for countries to gain visible benefits from their exports and from opening up of domestic and
international markets. However, over the past few years, the progress of WTO has been unstable. 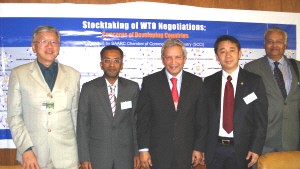 The session stressed the desire of South Asian countries to bring the WTO negotiations back on track. It provided useful insights about what should be done to move forward with the negotiations and reconcile the differences and conflicting interests of the developed and developing countries to promote a multilateral trading system and overall global development.