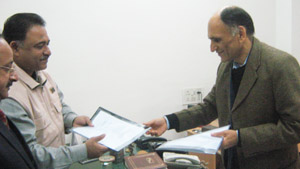 Lack of consumers’ access to adequate information, improper understanding about the consumer rights and redressal mechanism as well as other socio-economic vulnerabilities are the main reasons that they are still struggling to get justice even after coming into existence of the Consumer Protection Act in the year 1986.

The objective of the project is to generate a more capable consumer movement by way of equipping with skills and build up network of zealous grassroots activists through intensive training, capacity building and orientation programmes on relevant consumer protection issues to create an enabling environment at the grassroots in selected 12 Districts of the state.

The project will be run for three years and various activities for consumer capacity building, awareness, advocacy will be organised during the project, such as Public interface and outreach meetings on various consumer issues, District level training workshops for consumer activists and Media sensitization workshops at districts and state level, apart from research, publications, briefing papers and newsletters for wider outreach of the project massages.