Citizens’ Survey Report released by CUTS, an NGO, says 80% residents don’t have parks; 50% complain their colony has no roads

The result did not have anything new to reveal. But, what surprised the surveyors from CUTS, an NGO, was the magnitude of the people who consider themselves as have-nots when it is about getting access to basic facilities in city.

In the state’s capital, the biggest problem is the lack of roads or their bad condition. In the survey, 45 per cent people admitted the road conditions are very bad or there were no roads at all in the colony where they resided. Only one percent of the residents said that roads are good in their locality.

Another major problem came to the notice of the surveyors of sanitation in city. Half the people interviewed were disappointed with sanitation arrangements. Quite surprising when JMC claims that 8,000 employees are keeping the city clean at a daily cost of Rs19 crore.

More than 80 per cent of the respondents said there are no parks for recreation and marriage grounds in their area.One in every three residents said they have not seen streetlights lighting up the access road to their residence.

The survey was conducted by CUTS with The Asia Foundation. The sample size was 600 people; 75 people were interviewed from each ward. 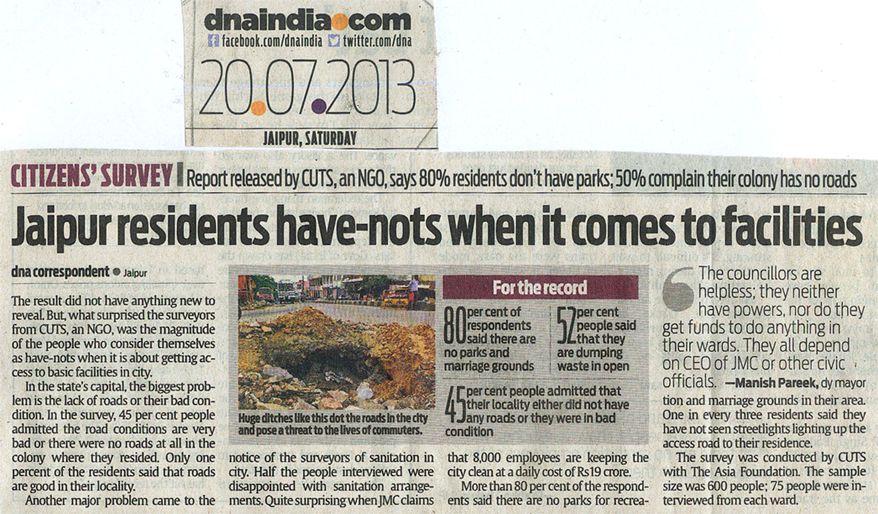 This news item can also be viewed at: http://epaper.dnaindia.com/