“The government has come out with twenty-five monitoring indicators to chart the country’s inclusive growth over a period of time”, said Montek Ahluwalia, Deputy Chairman of the Planning Commission of India, while delivering the CUTS 30th Anniversary Lecture at New Delhi yesterday. “The same will soon be available on the Planning Commission of India’s website for public access”, he added. 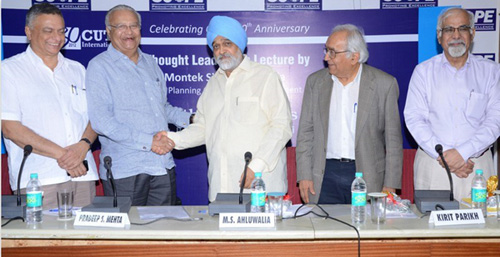 The theme of the lecture was “Inclusive Growth: What does it Mean”. Also speaking on the occasion were Mr. Kirit Parikh, Executive Director of Integrated Research for Action and Development who chaired the session, Mr. TCA Srinivasa Raghavan, Editorial Advisor to CEO, Kasturi & Sons and Mr. Surjit Bhalla, Managing Director, Oxus Research and Investment.

As a precursor to the discussion, Parikh introduced Inclusive Growth as an open matrix including development of both poor as well as rich, without neglecting either.

Ahluwalia said that the government while looking at the concept of growth has never focused on strengthening the nation but on raising the nation to an acceptable level of living. Calling Pandit Jawahar Lal Nehru, India’s first Prime Minister, the original growthwallah of the country, he reiterated and agreed with his words that to bring the nation to an acceptable level of living, the national income needs to be increased. These words are from Nehru’s drafting in 1938 when he chaired the Indian National Congress’s committee on the economy.

Answering the question on, ‘Does growth reduce poverty”, Ahluwalia responded that in early days, the focus of growth used to be only poverty reduction, however, it was gradually realised that to bring in growth more than eradication of poverty is needed. The cake has to be expanded to generate resources for poverty reduction. Growth does not only mean making poor people less poor but its prime focus should be social mobility, i.e. giving people a chance to trade their positions in society.

Inclusive growth on the other hand also faces the challenges on reducing the gap between various classes in the country such as the rural-urban divide, among various Indian states, inequalities across various socio-economic groups based on caste, gender, marginalised groups like religious/regional minorities, handicapped etc.

Ahluwalia strongly felt that the focus of growth must not be only on reducing poverty but it should also be a job creating growth benefitting both lower as well as middle class. He acknowledged that growth is affected not only by government’s policies but also by global economy, cronyism, among other factors. Keeping in mind the weak global economy in future, India will need to strengthen its own backyard, he added.

India can do seven pc growth in the next two years

He stated that India is capable of a growth performance above 7 percent over the next two years if corrective and timely measures are taken.

As per Ahluwalia, to achieve the level of growth China has achieved India will need to improve infrastructure, improve management of land and urbanisation so that new management may be set up and finally introduce flexibility of labour laws. Acknowledging that for a decent inclusive growth, less restrictive labour laws will be required, however, consensus will first be required from labour in this respect.

TCA Srinivasa Raghavan, agreeing with Ahluwalia’s view that glass is certainly not full but is filling, asserted that the problem is not with the Indian labour laws but with the manner in which management manages the trade unions, and how the labour courts perform. He said that the major way to bring about inclusive growth will be by achieving non-convexity.

Surjit Bhalla defined Inclusive Growth to mean equality of opportunity. He acknowledged India as a unique multi-dimensional country and mentioned that the country has numerous success stories in terms of social mobility, child mortality, sex ratio, etc. and there is a need to advertise and market the story of India’s growth properly and he is hopeful about change.

There was a lively Q&A session, when numerous micro and macro issues were raised by the over 100 participants in the hall. For instance, a question was raised on the role of private sector, and Ahluwalia responded that healthy competition can lead to better corporate governance. On sticky industrial relations, he said that consensus building is going on, and in a democracy like India, it is not easy. He asserted that non-discriminatory participation of every citizen is required.

Questions were also raised on industrial relations, security and other issues.

Pradeep Mehta of CUTS referring to his long association with Ahluwalia and said that according to CUTS studies, flanking policies such as education, health, social infrastructure need to be effectively in place for reaping the benefits of growth, otherwise it can lead to asymmetries.

Marking an end to the session, Kirit Parikh in his summarization said that the multi-dimensional concept of Inclusive Growth should translate to mean every child having an expectation of a basic minimum income.

While proposing the vote of thanks, Bipul Chatterjee, said that while it is easy to measure absolute growth, mechanics of measuring inclusive growth need to be developed. Ends.