INDIA will press for review and conclusion of Uruguay Round mandated agenda and oppose inclusion of new issues and overloading of WTO at the crucial 4th Ministerial Conference in November at Doha.

This was stated by Mr Digvijay Singh, Minister of State for Commerce and Industry, while addressing the seminar jointly organised by the Federation of Indian Chambers of Commerce and Industry (FICCI) and Consumer Unity & Trust Society (CUTS) on “Reflections on Doha Ministerial of WTO: Issues and Options” in the capital on Monday. 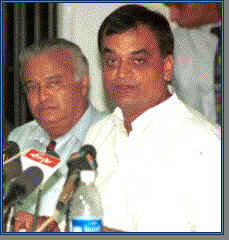 The Minister of State for Commerce and Industry, Mr Digvijay Singh, (right)with Mr Pradeep Mehta, Secretary General, (CUTS) addressing a seminar on “Reflection on Doha Ministerial of the WTO: Issues and Options” in the Capital on Monday.

Mr Singh said that India will press for giving policy direction to the mandated review and to resolve implementation issues in terms of General Council decision of May 2000 and address major current issues like TRIPS and public health. Any move to inject further issues runs the risk of making the agenda unsustainable.

The Minister further said that no prima facie case has been established on the necessity or relevance of the proposed new issues into WTO framework; nor it is cogently shown that the developing countries are going to definitely benefit from negotiations in new areas.

On the contrary, it is rather clear that taking up new issues would result in additional obligations for them. The main category of new issues being pushed into the WTO agenda include international investment rules, competition policy, transparency in government procurement, global coherence, trade facilitation, industrial tariffs and environment, he said.

Mr Singh said that previous commitments of Uruguay Round have not been fulfilled by developed nations. Due to the backloaded nature of the integration of restrained textile items and also due to the perpetuation of trade-distorting domestic and export subsidies coupled with high tariffs and tariff escalation in agriculture by the developed countries, the expected market access has never been realised, he said.

There are several asymmetries and inequities in most of Agreements including those relating to anti-dumping, subsidies, intellectual property, TRIMs and the non-realisation of expected benefits which have been a matter of serious concern. On the one hand, India has eliminated all kinds of quantative restrictions and is progressively reducing tariff levels, on the other, trade barriers imposed by the developed countries are becoming more and more impregnable.