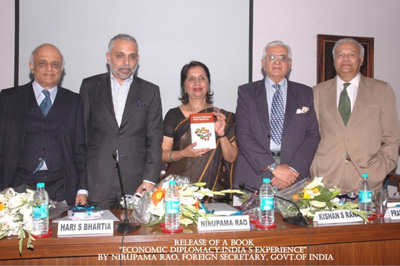 On a day that witnessed the presentation of the country’s annual budget in Parliament, Foreign Secretary Nirupama Rao pitched for the pursuit of a robust economic diplomacy that would be in tune with India’s stature as “an important bulwark of the global economy”. “Our diplomats must work to catalyse growth”, said Ms. Rao, “and as it is often said, the business of today’s diplomacy is business itself”.

She was speaking at the Indian Council of World Affairs on the occasion of the book launch of “Economic Diplomacy: India’s Experience”, edited by Ambassador Kishan S. Rana and Bipul Chatterjee.

The Foreign Secretary observed that increased expectations from India meant that a “constant reinvention of our role” in global economic affairs was imperative. Ms. Rao highlighted three areas of priority, namely the protection of India’s interests at the WTO, addressing the country’s energy security concerns and ensuring increased market access for Indian goods abroad.

However, the surge in economic diplomacy should also correspond to our national and political interests, she said. Overseas investments “must respond to local sensitivities” regarding “employment and environmental aspects”.