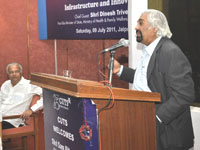 JAIPUR: Sam Pitroda believes India needs to “democratise” information to help innovations happen. “Democratise information – make it accessible to everyone. To innovate we need authentic and real-time information,” he said. Pitroda was delivering a lecture on ‘Public Information Infrastructure and Innovations’ organised by the consumer rights society, CUTS, on Saturday.

Referring to WikiLeaks, Pitroda said nothing remained a secret in today’s world. “Whatever we do or say can be passed on to the other corner of the world. It is important that our public and private standards are the same,” he said.

For innovations to happen, Pitroda said, parents need to educate the youngsters and “turn them loose”. “Facebook today is worth billions of dollars. People of my generation-even I — would not have approved the idea. But that is what the young generation can visualise,” he said.

Pitroda spoke on how fast the growth in technology was going to change our lives. “Future generations won’t need teachers, universities will become obsolete. Technology will change the teaching module and there will be no classrooms. The same will happen with doctors.

With tele-medication around, there will be no need of going to doctors. People will visit only specialists. In a sense, everything we do today is going to become obsolete,” he said.