How many of us actually bother to check the weight and quantity of a product before buying it? Clearly not a majority, as a survey on the state of consumers in Karnataka has found it.

According to the report, released in Bangalore on Friday, only 56 per cent of the 608 respondents in Karnataka checked the weight and quantity of products before purchasing.

The survey, part of a nationwide initiative called Indian Consumers in the New Age: A Forward-Looking Agenda to Address the Concerns of the Common People (ConsumersUp) was conducted across 88 districts of 19 States and three Union Territories. As many as 11,500 people were surveyed from March 2012 to June 2012, 47 per cent of them women.

Conducted to mark 25 years of the Consumer Protection Act, the survey aimed to assess the awareness level of consumers about their rights. It was carried out by a Jaipur-based non-governmental organisation — Consumer Unity and Trust society (CUTS) — in association with the Union Department of Consumer Affairs and Bangalore-based Consumer Rights Education and Awareness Trust (CREAT). 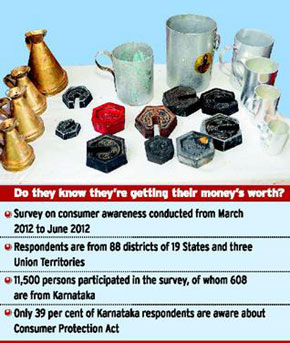 In Karnataka, only 39 per cent of the 608 respondents are aware about the Consumer Protection Act 1986. Corroborating the statement by activists that most consumers don’t voice their complaints to the seller, the survey found that 89 per cent of the respondents never made a formal complaint. While seven per cent registered their complaints, a mere one per cent approached consumer protection forums for grievance redressal. None have approached the sector ombudsman for redressal.

This news can also be viewed at: http://www.thehindu.com/