This was the first event organised by CUTS ARC on the EIF project. The workshop was held on January 23, 2009 at Cresta Golf View, Lusaka. The objectives of the workshop were:

to sensitise participants on the EIF for Poverty Reduction Project;

to create awareness and share views on the EIF process; and

to create a wider platform for the debate over the EIF processes.

The workshop was attended by 50 participants from various organisations including representatives from the government and the Finnish Embassy, private sector, civil society organisations (CSOs) and the media. 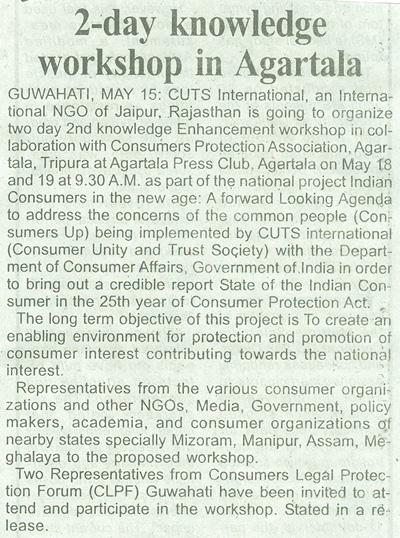 All secretaries to the Government of India should have received ‘outstanding’ grading over their last five annual appraisals, by and large, otherwise they won’t be eligible to claim the coveted title. As one babu quipped, if all of them are ‘outstanding’, why is their performance so average as evident from the poor results in many cases? Granted, truly excellent officers have to work with average colleagues and an archaic system, and cannot really work as lone rangers.

This babu friend had unfortunately got ‘Very Good’ once and that meant his death knell in terms of his dream of becoming a hallowed secretary or even an additional secretary to the GoI. Usually, in civil services, promotions happen automatically. Some selection criterion does exist in the Central Government, but merit is not considered in its proper dimensions.

There are counter arguments to this — many say favouritism can allow sycophantic officers to go higher than the deserving ones. In the armed forces, it is said, promotions take place mainly on merit and officers get weeded out even before they retire. Efforts to bring in the same system in the civil services have not been successful and that is needed if economic and governance reforms have to succeed.

Perhaps the establishment is inured to the Peter Principle, that a person reaches his level of incompetence sooner or later.

Consequently, we get an average administration which is good at pushing files. Many babus earn plaudits for not taking any decisions rather than for taking decisions because of the fear of vilification and/or punishment.

In my 30 years of public advocacy, I have come across a variety of babus to whom the Peter Principle applies without doubt, but the system protects them from being weeded out. And many of them, aided by a strong fraternity, end up in some sinecure post for five more years after retirement. This makes a mockery of the system and the nation has to bear the burden.

On the other hand, if one looks at the armed forces, a person can rise to the level of colonel or captain in the navy or group captain in the air force after 23 years of service. But that may be at the end of his career, unless he has successfully undergone training and promotion tests for going up. Unlike the forces to which people enter via specialised training centres, civil servants can be from any discipline but have to qualify through the UPSC exams. Thus we also find doctors, scientists, engineers, management graduates and social scientists who end up in the service that requires general skills and a good IQ.

The investment in specialised skills is lost to the society. Also, other aspirants to such an education also lose the opportunity since the seats are limited in good professional institutions.

Besides, the civil services have always opposed the lateral entry of good professionals in government. For example, in 1959, an industrial management pool was created to engage successful private sector executives in public enterprises. Many joined, sacrificing their compensation packages, and have risen up in the Government. But recruitment took place only for one year and the system was pulled back, ostensibly to protect the civil services.

Nearly 200 civil servants have been occupying posts in public enterprises since then. This is not to say that exceptional econocrats or even scientists have not held senior positions in the Government but they were exceptions. How does all this apply in Narendra Modi’s push for Make in India? Hugely. Unless civil service reforms are carried out, doing business in India will remain difficult in spite of tomes of studies and reports, and platitudes.

The Second Administrative Reforms Commission (ARC) headed by Veerappa Moily had gone in depth into civil service reforms to make it more efficient, but the recommendations are yet to be implemented fully. Some simple steps have been taken but they have not been able to address the structural issues.

Recommendations have been made to mandate mid-career training as a promotion criterion. By and large, civil servants having worked for nearly 25 years are being sent, rather than phased out into 10, 15 and 20 years service.

Having interacted with many, one does not find any significant change in them or their attitudes after they have come back. Sometimes, one sees an officer working in a particular discipline being sent abroad for specialised training but coming back and spending the rest of his career in jobs where that training will never help.

The Second ARC had recommended many armed forces-like changes in the civil services. This included the establishment of a National Institute for Public Administration to run specialised degree courses for aspirants, but conceded that aspirants from other disciplines may also be admissible after doing a bridge course. Capacity building was also defined in depth and it was suggested that for every promotion a mandatory training was needed.

Most importantly, the Second ARC also recommended that officers be put into specific domains, based on their academic qualifications, experience and aptitude, so that “the most suitable for the post is selected”.

A similar practice was also followed under the ICS. The Second ARC had also suggested that there should be competition for senior positions, but that has translated into jockeying rather than being done through a logical process.

Among many sterling suggestions, the Second ARC had also recommended lateral entry for positions of additional secretary and above, which does not exist in the armed forces. Another critical suggestion was borrowing from the armed forces’ practice of weeding out officers after 20 years of service and suggesting that appointments should only be made for 20 years and their continuation would depend on their performance.

The writer is the secretary-general of CUTS International

This news can also be viewed at: http://www.thehindubusinessline.com