The government is trying to sell Jaipur as a world class city but the ground reality is pathetic. A survey conducted by an NGO reveals that 52% of the people in Jaipur dump their garbage in open spaces.

Consumer Unity and Trust Society (CUTS), an NGO working for a consumer protection in Jaipur, conducted the survey of 600 residents in eight selected wards of the city. The residents had to fill in a questionnaire asking whether they were satisfied with the key services such as roads, sewerage, solid garbage, water supply, and amenities such as parks and playgrounds in the city.

Apart from problem of solid waste dumping, people complained about lack of parking space. The survey revealed that 50% people face parking problem in their areas.

Geogre Cherian, director, CUTS International, said that residents pointed out that while cars had mushroomed in the city there was no adequate parking space either in commercial or in residential areas.

The survey found that 34% of the people are facing problem of water scarcity as the supply of water in some of the wards is very poor and the quality of the water too is suspect.

Shrinking green spaces are also a concern. Only 21% of the people have park in their area.

About 74% of the people said stray animals are a menace in the city. Moreover, the strong union of sanitation workers has proved a major hurdle in getting sanitation works through private players for garbage collection in the city.

Cherian said “Negligible devolution of power to the Urban Local Bodies, poor participation of citizens and absence of ward committees are the root causes of poor service delivery.”

The study points out that the JMC has a staff of 8,000 and spends R19 crore on sanitation per month but has still been unable to get its act together. 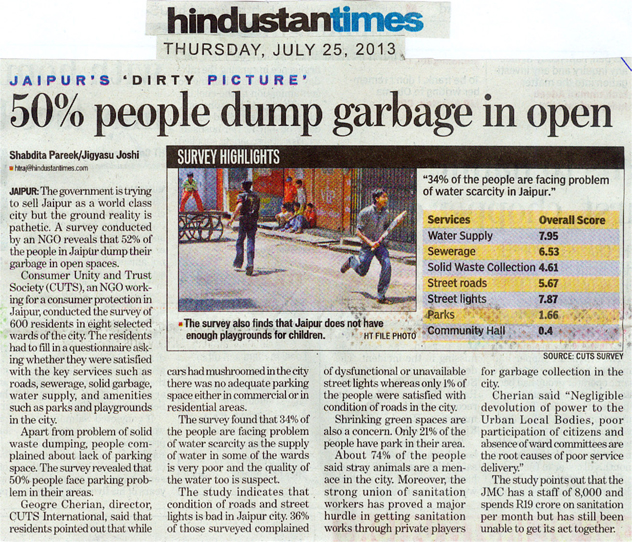 This news item can also be viewed at: http://paper.hindustantimes.com/